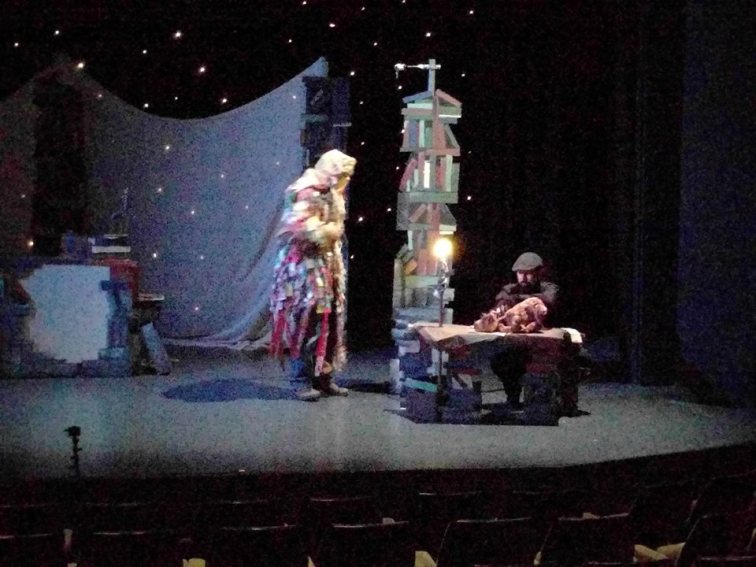 The whole of Llanfoist Primary School arrived at 9.30am to see our developed piece on Tuesday 26th April. The school have been a huge part of our devising and development process, and it was a real pleasure to have them all there to see what we have created so far. Along with the pupils of Llanfoist, other key people were there to see our R&D work, among them Marion of Abergavenny Community Centre, Charles Way, Marion Morden and Nick Banwell of the Borough, and Hilary and Christine of Night Out/Noson Allan. As many people have been instrumental so far in our process of creating Arthur, it was wonderful to have so many diverse voices and experiences at this showing of our work.

Following our showing, we were also pleased to have the opportunity to ask members of the audience for feedback. Llanfoist Primary have many budding puppeteers and technicians it seems – they were more than happy to give us plenty of complimentary feedback and constructive criticism, some of which I’ll include below. The children provided some really insightful and useful commentary, and it will be really key to the next stage of developing Arthur.

“The bears should be scarier, and need some teeth.”

“The set maybe needs to look more like a forest.”

“The witch could be scarier.”

It was also an opportunity for us to assess how far elements of the story had been understood or processed, and what characters had been central for the children. We asked them what they thought should happen next, and there was some assertion that they wanted to know what happened next to the witch (Morgana), Merlin, and the bear:

“The bear could find his family.”

“The witch and the wizard could get married.”

“The witch could steal the wizard’s power and the bear could go on an adventure.”

“The witch could kidnap the bear.”

Getting feedback from so many different age groups was wonderful, and it was great to see how confident the children were in providing articulate feedback for us. We will definitely take it onboard!